Danville, CA — A racially charged “joke” is at the center of a controversy in an affluent Northern California community, begging the question: At what point does a racial joke go too far?

And he won. Sound familiar?

After some criticism and threats by the district to strip his title, the boy’s parents cried “victim” and according to NBC Bay Area, reportedly filed a writ, saying that his video was protected by the First Amendment’s right to free speech. While the free speech argument is relevant, critics are also raising the issue of Title IV of the Civil Rights Act, which obligates schools to prevent discrimination.

This fiasco is raising concern on both sides of the law and opening up many questions about how accommodating the city of Danville really is to non-whites. By allowing a student to enter a leadership position as student body president, is San Ramon Valley High endorsing bigotry? Free speech is one issue, but allowing a student of any race to be rewarded for a display of bigotry is another issue — one that stems deeper into the fact that the San Ramon Valley itself has recently undergone a demographic change and that perhaps the establishment in San Ramon and Danville are not too happy about the influx of prosperous “ethnics” and has yet to learn how to address racial issues in a sensitive manner.

The student was running for president at San Ramon Valley High, a northern California high school in the San Ramon Valley Unified School District — a district known for its diversity and affluent Muslim population. His video, which the student reportedly claims as a joke, depicted people dressed in Muslim garb and holding weapons. According to a mother whose children attended school in the district, the boy’s platform was “elect me and I will protect you from ISIS.”

But comments and alleged “jokes” about any race or religion are never a laughing matter for those who are the subject of the joke, especially when the group affected by the joke has experienced violent discrimination in the recent past. And while those who are not affected directly by a racist joke can sit back and say “relax, it’s just a joke,” the ramifications of such a joke can be severe— essentially establishing a racial superiority of the joke-teller over the victim of the bigoted joke.

Many parents in the diverse community are up in arms about the video, claiming that it has no place in a community like San Ramon Valley. The Muslim community is also disappointed.

“I’m pulling my son out of school and home schooling him. I can’t knowingly subject my kid to Islamophobia” said one distraught Muslim mother in the district, who wished to remain unnamed. 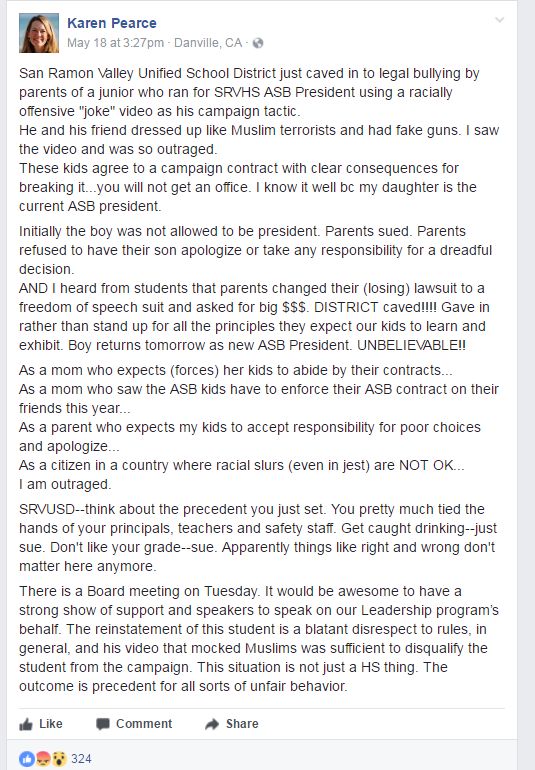 Is Islamophobic rhetoric protected under the First Amendment?

San Ramon Valley High backed down and reinstated the student’s electoral win after his parents threatened a lawsuit. Their argument, according to parents at the school, was that the student’s speech was protected under the First Amendment’s right to free speech.

Is hateful rhetoric protected, though?

Hate speech is a tricky area and in an era so rife with racial strain, the courts have a fine line to walk when reviewing First Amendment issues. Hate speech is not protected under the First Amendment, but this is in limited situations — specifically situations where the speech is directed at an individual or where it runs the risk of inciting imminent violence.

Should bigoted speech be censored in public schools?

The issue for many constitutional lawyers is that the censorship of any speech, even hateful speech, has broad ramifications. As such the American Civil Liberties Union has addressed this issue, saying that sometimes the best response to hateful rhetoric is to allow it, but to stand up to it. It’s the old wisdom of standing up to your bully so that the bully never bullies again.

The fundamental problem here is that if allowed to be student body president, San Ramon Valley High will send a message to the Muslims and perhaps even the other ethnic demographic. That message is one of racial privilege and superiority. Using racial stereotypes as the punchline of any campaign and then, saying “relax, we were kidding,” is offensive. It has the effect of ignoring the struggles of a group and dehumanizing the person or group who is at the butt of the joke. It’s a way of asserting a casual dominance over another by acting like their feelings don’t matter. Anyone who makes a racial joke and fails to apologize for it is effectively saying “I can do this because I am superior to you.”

And to be fair, racial privilege isn’t simply a “white privilege” issue. It’s the idea that a particular race is inferior and that there exists a privilege to make jokes at the expense of that “less superior” race.

In short, racist jokes decrease sensitivity towards a group and make it easier for people to justify bigotry towards that group. According to a study referenced in Psychology Today, telling racist jokes about certain demographics actually releases inhibitions that the joke participants may have about that race and makes the participants feel like it’s OK to discriminate against the race or group.

The San Ramon Valley District is having a community meeting on Tuesday to address the issue. But this issue has already gone far beyond a simple student council election. The Islamophobic video has opened the door to discussion that touches on deeper topics — topics of racial privilege, xenophobia, and whether this is a display of a latent racism that persists among San Ramon Valley’s affluent population as the demographic shifts. The district’s argument is that their hands are tied, now that there is a lawsuit. But nobody is calling on expulsion of the student. There are many effective ways that San Ramon Valley High can deal with this issue and address the cultural sensitivities at play here.

If the school district stands by silently, they will be sending a loud and clear message about where they stand on discrimination.

Help us tell more of the stories that matter from voices that too often remain unheard.