At a time when oddball memes like St. Louis-style bagels and baby cheese face are popping up left and right, it can be hard for corporate April Fools’ Day jokes to make much noise on the internet. But that doesn’t stop chain restaurants, newspaper food sections, and snack companies from trying their hands at comedy on April 1. Here’s a roundup of notable April Fools’ Day stunts from around the web, including a truly hilarious piece of satire and a few very amusing videos.

Biting satire from the LA Times

No one associates New York, a city in the eastern United States, with good restaurants. That’s beginning to change. https://t.co/WpPyyvqKHU

The best April Fools’ Day joke so far is Lucas Peterson’s LA Times article, “For cramped New York, an expanding dining scene,” which approaches the NYC food landscape with the same culinary bias and bewilderment that some East Coast writers apply to their surveys of Los Angeles. One choice nugget:

My first culinary encounter was with pizza, a mysterious kind of baked tlayuda, covered in macerated tomatoes and milk coagulation, and occasionally smothered with a type of thinly sliced lap cheong called pepperoni. The odd dish, sometimes referred to as a pie, washed ashore from Naples some years ago. While the taste takes some getting used to, pizza can be enchanting when done properly.

In a masterful bit of trolling, the article also includes a sneaky link to the New York Times article that was originally titled, “The Blobs In Your Tea? They’re Supposed to Be There.”

Moving onto the much less funny world of April Fools’ Day brand stunts, McDonald’s shares a video this morning of its new (fake) “shake sauce” packets, which are just little portions of milkshakes for dipping nuggets, fries, and apple pies.

Starbucks, but for dogs

America’s coffee behemoth imagines what a new cafe model just for pups might look like. “The clientele is a bit more unpredictable,” a barista explains. “Oh, but they do always come when their name is called.”

Pizza Hut delivery, but with dogs

He don’t protec. He don’t attac. But he do deliver a pizza snac. Now announcing the Pizza M. U. T. T. delivery team. Use code 30OFFAPRIL1 for 30% OFF menu-priced pizzas. Today only. pic.twitter.com/gCzXIgCtJr

Because nothing says “inoffensive corporate fun” like a dog joke, Pizza Hut also tweeted a puppy-themed prank today: the Pizza M.U.T.T. delivery team. As a reward for enduring this groan-worthy joke, Pizza Hut is offering a 30 percent off coupon.

It’s actually just two very large doughnuts stacked on top of each other.

Turns out there is no actual frozen burger auction livestream, and the link just goes to a history of the fast food chain.

Today only! To celebrate our 53rd anniversary, we’ve developed a special new cold brew inspired by our founder’s Dutch heritage—a sprinkle of salty licorice and a topper of Boerenkaas cheese! See how you can get your hands on this delicious treat: https://t.co/p9Go3Nf2RW pic.twitter.com/CpRYwI0Wt6

Employing a similar tactic as White Castle, Peet’s teased a special promotion on Twitter, but the link goes to a page indicating that it’s all a joke.

You look like a snack, so your skincare routine should compliment that. Which explains why when we discovered skincare benefits in our ice cream, we decided to develop something special just for our fans- Introducing, new Halo Top Face Masks! Check it out:https://t.co/SeAIQydgP0 pic.twitter.com/8t0h17fXba

The job description is incredibly vague, but the gig economy will probably make this position irrelevant in a few years anyway.

Jägermesister gets into the weed business 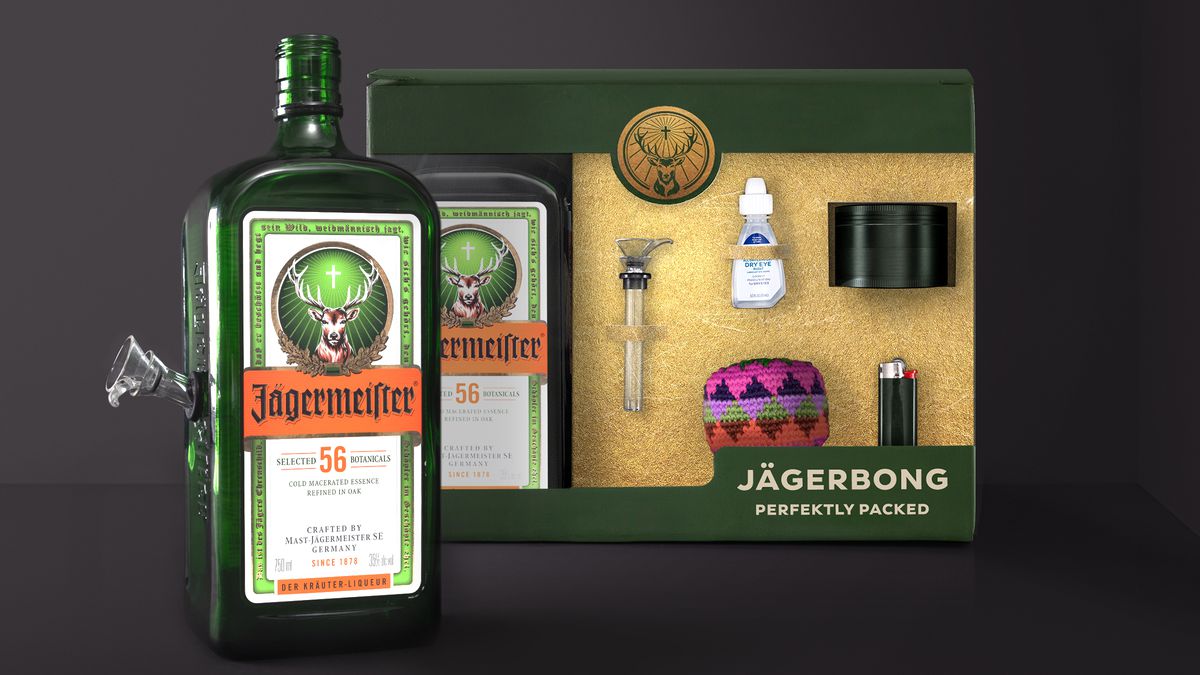 Jägermesister introduces $42 “Jägerbong” kits, which will help party-loving hooligans turn old booze bottles into bongs. The package includes a one liter bottle of hooch plus “a bong carb, a hacky sack, eye drops, a lighter, and grinder.”

Inspired, no doubt, by the popularity of oat milk, online grocery store FreshDirect is introducing cauliflower milk — or “caulk.” This is a good one.

only four months late, but new year, new us.⁣
⁣
introducing the new skinnyburger, because it’s never too late for a glow up, right? we’ve heard all your dm’s and comments about your fave item and the skinnyburger comes up top. it’s time to give you what you’ve been asking fo… pic.twitter.com/wupGcT0vld

Last week, the LA-based chain teased a rebrand to Skinnyburger. But today, Fatburger announces that the chain is still the same as always, and it’s offering free delivery via Postmates tomorrow.

Starting Summer 2019, red licorice straws will be our 1st test for an eco-friendly alternative for plastic straws! Soon, you may even be able to enjoy that drink with a Cheddar Bay Biscuit flavored licorice straw. What do you think about this sweet move? #LicoriceStraw pic.twitter.com/N7AUX8DhjQ

Riffing on straw ban mania, Red Lobster jokes about replacing all of its regular sipping utensils with red licorice.

Although this is a joke, there are some Disney fans out there who would probably love to walk around the Magic Kingdom with two Dole Whip cups on their heads.

And finally, Denver taqueria Illegal Pete’s created one of the best videos of April Fools’ 2019 with this fake commercial for its upscale counterpart promising “a bespoke culinary encounter.”

By signing up, you agree to our

and European users agree to the data transfer policy.