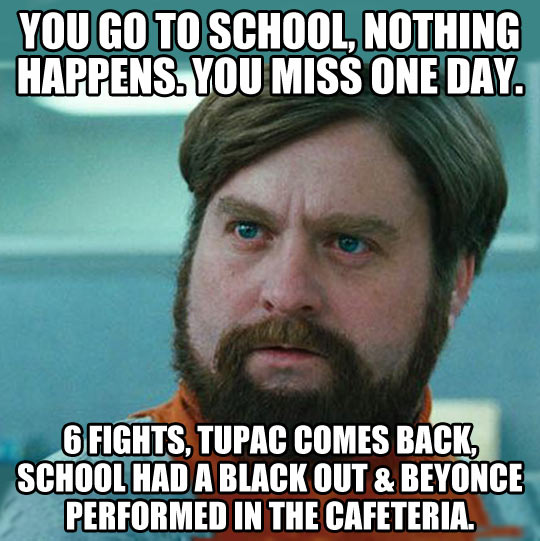 Check out these funny school jokes we have found for you. They are the best you will find.

1. Teacher: ‘How can we keep the school clean?’ Student: ‘By staying at home.’

3. Q: What’s the difference between a dead prostitute and school? A: School still sucks!

4. Q: What happened to the plant in math class? A: It grew square roots.

5. Q: Why did the student throw his watch out of the school window? A: He wanted to see time fly.

6. Q: Why did the student take a ladder to school? A: Because he/she was going to high school! 7. A Teacher was once giving a big test. Upon collecting the tests she noticed a note attached to the test with a $100 bill underneath, “one dollar per point please” the note said.

9. Teacher received the following letter from one of her students’ parents: “Harry is sorry he didn’t do his homework last night. He will never do it again.”

10. As a 7th grade biology teacher, I was teaching my class about the flow of blood in the body. After my lecture I asked the class the following:

“Why is it that if I would turn upside down, my face would turn red since the blood would flow to my head, but when I stand upright my feet don’t turn red?”

I was taken aback when a boy blurted out, “that’s cuz your feet aint empty!”

11. A father who is very much concerned about his son’s bad grades in math decides to register him at a catholic school.

After his first term there, the son brings home his report card: He’s getting “A”s in math.

The father is, of course, pleased, but wants to know: “Why are your math grades suddenly so good?” “You know”, the son explains, “when I walked into the classroom the first day, and I saw that guy on the wall nailed to a plus sign, I knew one thing: This place means business!”

12. The teacher asks, “Flora, what part of the human body increases ten times when excited?” Flora blushes and says, “That’s disgusting, I won’t even answer that question.”

The teacher calls on Johnny: “What part of the human body increases ten times when excited?”

“That’s correct.” She then turns to Flora and says, “First, you didn’t do your homework. Second, you have a dirty mind. And third, you’re in for a BIG disappointment.” 13. At the start of the exam, the invigilator says, “You have exactly 2 hours. I will not accept any papers after this time has elapsed.”

Two hours later, the invigilator calls out, “Time’s up, Ladies and Gentlemen.”

One student is still scribbling away ten minutes later when the invigilator has all the collected papers in a large stack front of him. Slowly, the student finishes up and walks over to hand in his paper, but the invigilator refuses to accept it. The student puffs up his chest and says:

“No,” says the invigilator.

“Great,” says the student as he slips his paper into the middle of the stack.

Miss Rogers says, “All right, Sarah, what is your multi-syllable word?”

15. The teacher asked Jimmy, “Why is your cat at school today Jimmy?” Jimmy replied crying, “Because I heard my daddy tell my mommy, ‘I am going to eat that p*ssy once Jimmy leaves for school today!’”

16. In a Catholic school cafeteria, a nun places a note in front of a pile of apples, “Only take one. God is watching.” Further down the line is a pile of cookies. A little boy makes his own note, “Take all you want. God is watching the apples.”

17. A student comes to a young professor’s office hours. She glances down the hall, closes his door, kneels pleadingly. “I would do anything to pass this exam.” She leans closer to him, flips back her hair, gazes meaningfully into his eyes. “I mean…” she whispers, ” I would do…anything.” He returns her gaze. “Anything?” Anything.” His voice softens. “Anything??” “Absolutely anything.” His voice turns to a whisper. “Would you…study?”

Teacher: “What sign?” Little Johnny: “The one that says, ‘School Ahead, Go Slow.’”

19. The bell rang for school to start and Johnny walked in late. Mr. Clark asked, “Johnny, why are you late?” He replied, “I was on Cherry Hill.” Then he sat down.

Ten minutes later Nathan walked in late and Mr. Clark repeated, “Why are you late?” Nathan answered, “I was on top of Cherry Hill.”

Five minutes later Kevin walked in late and Mr. Clark said to him, “Kevin, where have you been?” Kevin replied, “I was on Cherry Hill.”

Ten minutes later a girl walked in the classroom and Mr. Clark asked, “Hi there, what’s your name?” The girl replied, “Cherry Hill.”

20. Johnny was at school and the teacher said, “Someone use fascinate in a sentence.”

Sally answered, “The zoo was fascinating.” The teacher said, “Sorry, Sally, I said to use fascinate in a sentence.”

Maria suggested, “I was fascinated at the zoo.” Once again the teacher said, “No, Maria, I specifically said to use fascinate in a sentence.”

Johnny said, “My sister has ten buttons on her sweater.” Again the teacher said, “Sorry, Johnny, I said use fascinate in a sentence.” Johnny replied, “I know, but her boobs are so big she can only fasten eight.” Liked these funny school jokes? Then why not share them with your friends? They would thank you.

Then why not get our iOS app from

? Then you will have the world’s biggest collection of jokes and inspiring quotes right in your pocket, and the app will work faster than the site, so it will save you time and keep you entertained.